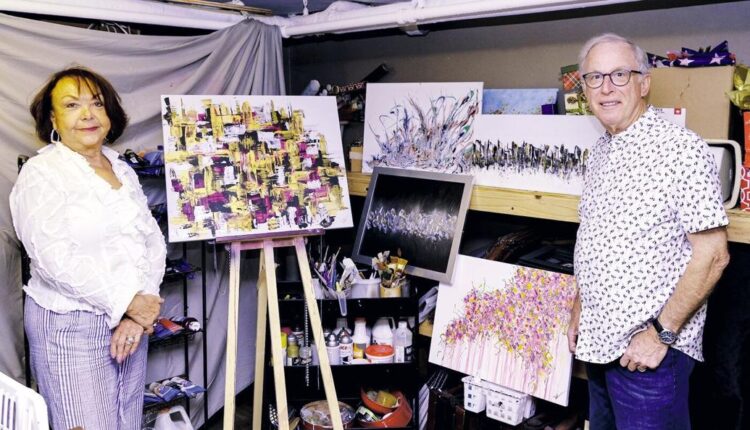 PORT WASHINGTON – A small school built of sticks and recycled wood in a village of 100 indigenous residents in the hills of southern Mexico caught the attention and hearts of a vacationing Port Washington couple.

On one of many vacations that former Cedarburg-Grafton residents Sharon Beste and Jerry Smith took to Mexico, they attended an art show that was raising funds to improve educational opportunities for impoverished communities. The event was run by Britt Jamryd, president of El Sueno Zapoteco Foundation, part of the Bacaanda Foundation, a certified U.S. and Mexican nonprofit organization in continuous operation since 2008 and concentrates on the mountain and coastline communities of the southern Oaxaca state in Mexico.

There are now 84 schools under the wings of the Bacaanda Foundation; seven or eight of them have sponsors. Each village has its own school. Students live within 15 miles of the schools in the region. Teachers are high school graduates who receive a small stipend to further their education if they complete two years of service and live in the school.

The government doesn’t support the schools. Mexico’s minimum wage is $8 a day for official jobs.

Jamryd invited the couple to tour some of the schools. On that trip, they visited a small village, where generations live together. Beste and Smith were so captivated by what they saw that for the last eight years, they have been sponsors of la Escuela Puente de Cuajinicuil (the school at Cuajinicuil River).

“We thought we’d be involved for maybe the next two weeks,” Smith said of that visit. “It was eye-awakening,” Beste added.

The village’s school was originally just a kindergarten, little more than a shelter. That building was replaced with a concrete addition and soon there will be a shower for the teachers.

Through the years, Beste and Smith accomplished a lot for the small school, which now includes students through sixth grade. They give to the school not only through sponsorship of students but in material donations and manual labor as well.

“We didn’t want to be ‘sun sponges,’” Beste said of a term that relates to visiting an area and giving back nothing in return

“We immediately decided to become involved.”

Smith and Beste have funded book shelves, books, desks, bed linens for the teachers, new windows, chests for their clothing. They’ve brought in WiFi, a computer, and a laser printer. They’ve painted, fenced in the school yard so that when the children play soccer, the ball doesn’t go over the cliff into the riverbed below and they snake- and bat-proofed the buildings.

“We’ve taught the children that it’s OK to be silly, it’s OK to spit watermelon seeds,” WHO said.

The couple has been padrono y padroni (godfather and godmother) of the school and have supported it for the past seven years.

“These kids have no future without education,” Smith said.

In support of their village school, Beste, who is a self-taught artist, will host an art show consisting of her 100 acrylic paintings.

The sale will run from 11 a.m. to 4 p.m. Saturday, June 25 in the back yard of the couple’s Port Washington home at 746 W. Grand Ave. Rain date is June 26. Paintings will be priced from $20 to $200. To make a donation to the school without buying a painting, checks made payable to the Bacaanda Foundation may be sent to Beste. Donations are tax deduction.