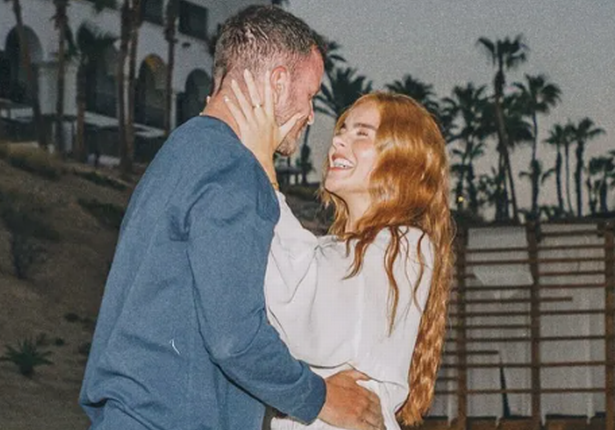 Hearts star Andy got down on one knee on their seventh anniversary in Los Cabos as Jilly revealed she’d said yes to her ‘first love’ but joked anyone who mentioned the ‘cheesy proposal’ wasn’t invited.

The sweethearts have been enjoying some sunshine in Mexico and, on their milestone day, the former Rangers star got down on one knee during a romantic dinner on the beach.

Jilly, known online as Jilly Isabella, shared an array of snaps from the stunning Los Cabos proposal as she looked shocked when Andy presented her with a ring.

Alongside the photos, Jilly wrote: “On our 7 year anniversary I said yes to my first love And if anyone dares bring up how cheesy this is you’re literally not invited to the wedding.”

Fans couldn’t contain their excitement at the news and were quick to flock to the comments.

One wrote: “Omg JILLY congratulations to you both these pics are so beautiful.”

Another added: “Omg so so happy for you darling! Congrats xxxxxxx.”

While one said: “I’m here for every single one of these pics and I’m over the moon for you both roll on the wedding.”

And one commented: “I’m just sitting going over these again and again with the biggest grin.”

And one posted: “Omg!!! Congratulations beauty so so happy for you.”

Only half an hour after being posted, Jilly’s pictures already racked up over 14,000 likes.

Jilly is yet to show off her new ring but we reckon it’s a total sparkler!

The pair have been enjoying a trip away together and recently toured California.

Just last month, they enjoyed some down time in the Tuscan Hills.

The fashion designer – who owns brand Dula – posed in the mirror as she wore a pastel coloured bikini from Asos.

She then posted some images of Andy lying by the pool in the shade.

She wrote: “How’s the non-ginger hiding from the sun that’s not how it’s supposed to go.”

In the next video Andy gives the thumbs up to video and she wrote: “Won’t be doing thumbs up for long cos I’m coming over to ask for a pic.”

She then shared a snap of her boyfriend as they went out for a dinner date.