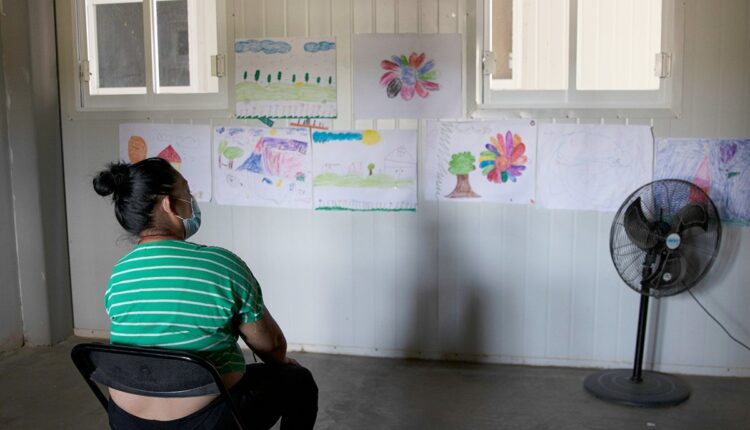 TAPACHULA, Mexico – The migrant crisis is evident everywhere in this city of 350,000 near Mexico’s southern border.

Migrants queue up at dawn to apply for immigration documents. Sidewalks overflow with migrants peddling fried rice and flat bill hats. A park, once a popular tourist attraction, is a makeshift campground. The sounds of Spanish, Hatiatian Creole and other languages rise above the teeming streets.

But one facet of the crisis simmers, invisible and largely ignored: The devastated mental health of migrants passing through Mexico on their way to the U.S.

For most migrants in Mexico, trauma is inescapable. It’s in the gang violence, domestic abuse and lack of basic necessities that prompt them to leave home, and it’s on the journey through Panama’s Darién Gap – a perilous route where rape, assault and death are common. And trauma waits for them in Mexico, where any hope of respite vanishes as they spend months sleeping in the streets, struggling to find work or sewing their mouths shut to protest the torpid immigration system.

Experts say it’s even in the migration and asylum process, which requires migrants to recount over and over again the violence they’ve endured.

The migration system “seeks to destroy the souls and minds of the people,” said Yamel Athie, a Tapachula psychologist and migrants’ rights activist.

The Mexican government does little to prioritize mental health for its own people, let alone people from other countries. Mexico trails its peers in both mental health spending and number of mental health professionals, making services hard to access all around.

And even where services are available, providers face numerous obstacles. Many migrants avoid seeking help because of the stigma attached to mental health issues, or because they come from cultures where trauma is so commonplace it goes unrecognized. Some don’t see the point in starting therapy or medication in a place they view as temporary. Others are simply too busy trying to survive.

Nongovernmental organizations are working tirelessly to fill the gap in need, creating innovative, culturally-competent services to meet migrants where they are.

Still, providers and experts agree that the problem eclipses all existing resources. As the migration crisis in Tapachula continues to worsen, they said, so, too, will migrants’ mental health.

“This is not just a crisis,” said Nadia Santillanes, a social anthropologist at University of California, San Diego’s Center for Global Mental Health. “This is going to be permanent.”

After walking for eight days, her feet blistered and cracked, SYH finally arrived in Tapachula from El Salvador.

The mother of three, who asked to be referred to by her initials to protect her identity, was anguished over leaving her home and family behind. But she felt she had no choice: After she and her partner refused to continue paying extortion money to a local gang, the gang kidnapped her and attacked her with an aluminum bat, she said. Fearing for her life, she fled.

Within her first few days in Tapachula, a sympathetic stranger helped connect SYH with Hospitalidad y Solidaridad, a shelter for refugees and asylum seekers. There, she was given a medical examination and two sessions with a psychologist. Just being able to vent about what she’d been through, she said, was cathartic.

“That helped me a lot, to get it off my chest,” she said.

SYH’s circumstances are common. The majority of migrants passing through Tapachula are from El Salvador, Honduras, Venezuela, Cuba, Chile and Haiti, where poverty, government corruption and gang violence are everyday occurrences.

In many migrants’ cultures, violence and trauma are so common they are normalized, experts said. And around the world, mental health treatment often still is thought of as only for people with serious mental illness, such as schizophrenia or severe bipolar disorder, and require institutionalization. More common symptoms, like depression and anxiety, are overlooked.

Pair those factors with most migrants’ realities as they struggle in Mexico to find work, shelter and feed their families, and it’s not surprising that relatively few seek mental health support.

“They are busy with other things. They are concerned with other things,” said Dr. Ietza Bojorquez, a researcher in the Department of Population Studies at El Colegio de la Frontera Norte in Tijuana, Mexico. “They are not going to seek a psychologist because they are blue.”

This history of untreated trauma, combined with the dangers migrants face on their journeys, the hardships they endure once in Mexico and the sense of loss they feel from leaving their homes, snowball into what some experts call “migratory grief.”

“They’re making the decision to move away from their countries. They’re experiencing mental health issues before even starting the process of migration,” said César Infante, a researcher at Mexico’s National Institute of Public Health.

Many migrants expect their situations to improve once they arrive in Mexico, he said, only to be immersed yet again in violence, deprivation and scarcity of food, water and shelter.

The sluggish migration process, which often keeps migrants trapped in Tapachula for months, can cause these crises to spiral. Multiple migrants have died by suicide in Tapachula in recent years, according to local news media reports.

The problem is widespread: According to data and testimony recorded by the global NGO Doctors Without Borders, of the thousands of migrants in Mexico it interviewed during mental health consultations in 2018 and 2019, the majority appeared to have anxiety, depression and PTSD. More than half said they had been exposed to violence on their migration route. Of the women surveyed, a third said they had suicidal thoughts.

And that was before the pandemic. In March 2020, U.S. President Donald Trump implemented Title 42, a controversial public health order that drastically restricted migration from Mexico and Canada in an attempt to stop the spread of COVID-19. This left many migrants stuck in limbo, unable to move forward in the U.S. asylum process. (The Biden administration has attempted to end Title 42 but has been blocked in federal court.)

In the pandemic’s early days, Bojorquez said, some migrant shelters implemented lockdowns that prevented people from coming and going freely, which made many feel even more trapped.

“The feeling of autonomy is very important for mental health,” she said. “That was lost during that time.”