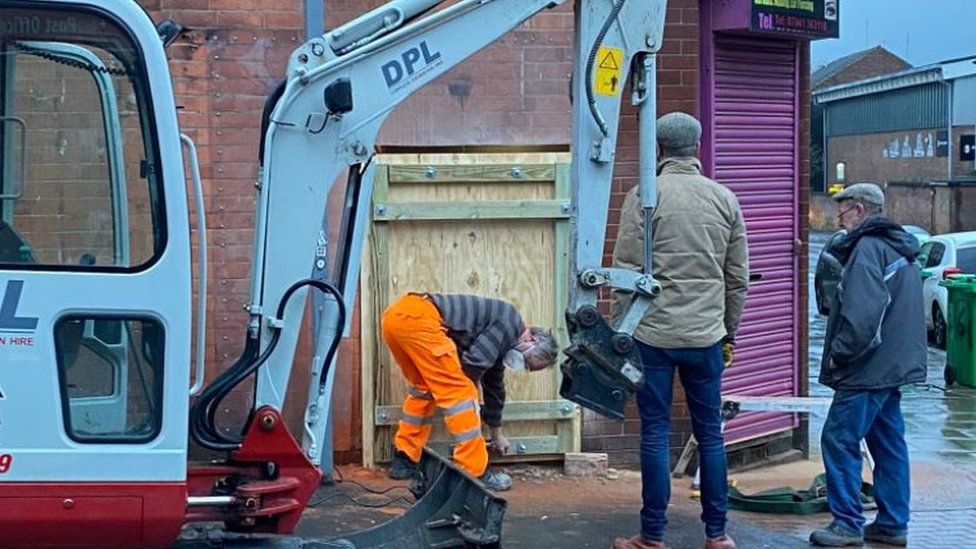 A Banksy artwork has been removed from the side of a building in Nottingham and sold to a collector.

The mural, which depicts a girl hula-hooping with a bicycle tyre, appeared on a residential street in October.

The “slab of brick” was seen being cut from the wall in Rothesay Avenue from about 05:00 GMT.

Gallery owner John Brandler told the BBC he paid a “six-figure sum” for the piece, and wanted to help preserve it, as well as put it on display.

Resident Dan Golstein said workmen were “drilling into the wall” in the early hours. The artwork was then seen being loaded into the back of a van.

Mr Brandler said the workers were part of a “very specialised company” which had removed Banksy art before.

He added he is now sending it to Scotland to be restored.

The collector owns a number of the elusive artist’s pieces, including Seasons Greetings.

He claimed he had saved the Nottingham artwork “in time” before damp could cause damage under the plastic cover put on by Nottingham City Council.

“If you put Perspex over a picture the moisture gets into the brick wall and can’t escape – the wall needs to breathe,” he said.

“If I hadn’t bought it and removed it, in two years’ time there wouldn’t have been a Banksy there at all.”

Mr Brandler said he planned to feature the piece in a street exhibition later this year at the Moyse’s Hall Museum in Bury St Edmunds, Suffolk.

But he added: “Work with me and it would be lovely to bring the whole show back [to Nottingham].”

City rejuvenation board The Nottingham Project said they had been in touch with Banksy’s team – Pest Control – since the mural appeared, and they believed its removal would go against his wishes.

A spokesman said they had sought Banksy’s approval to move the piece to a different location in the city.

He said: “They responded asking for the artwork to remain, so we respected the artist’s wishes.”

“Whilst we respect that this was a private decision for the landlord, we think it’s a great shame that Nottingham has lost its Banksy and we hope this doesn’t stop the artist coming back to the city in the future,” he added.

Harry and Meghan not returning as working members of…