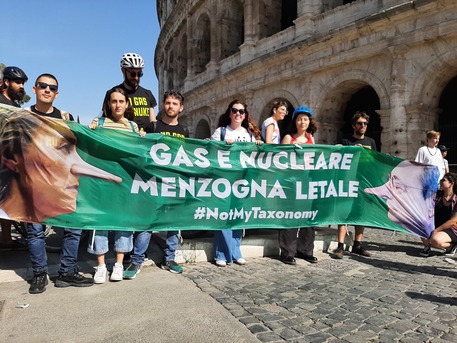 Don’t give green light to greenwashing – activists to EU

(By Paul Virgo) (ANSA) – ROME, MAY 26 – Italians concerned about the climate crisis are joining many scientists and environmental associations from across the continent in calling for the European Commission’s proposed sustainable finance ‘taxonomy’ plan to be rejected, saying it would give the green light to greenwashing.
The taxonomy is a system to classify which economic activities can claim to be sustainable and is meant to set rules that stop greenwashing – misleading people into thinking products or services are climate-friendly.
But critics say it will actually encourage greenwashing as the investments in gas and nuclear power will be classed as sustainable for investment purposes.
Gas plants are OK as long as they replace facilities using coal or oil and comply with certain limits on emissions.
This even though methane is an extremely powerful greenhouse gas with a global warming potential 86 times that of carbon dioxide over a 20-year period.
It has been given the all-clear as it has been classed as a ‘transitional’ bridge to lead towards a net-zero-emissions future.
Nuclear energy’s inclusion is controversial too.
Although nuclear power plants do not produce as much greenhouse gas as fossil fuels, they are far from carbon neutral, given the emissions generated by uranium extraction, transport and processing products, among other things.
There is also the issue of handling the radioactive waste produced by the plants and the risk of accidents.
“This is pure madness, we cannot accept this,” Valerio Mezzanotte of the Legambiente association told ANSA at a recent #NotMyTaxonomy demonstration in Rome.
“It would stop the decarbonization process, stop our transition to a new era of renewable energy.
“Including nuclear and gas in the new taxonomy would put them on the same level as renewable energy. It would be completely absurd.
“It would take us back 15 years in the process of renewing society”.
The #NotMyTaxonomy protests in Rome and Milan at the weekend were supported by 26 Italian groups, including the Italian sections of Fridays For Future, Parents for Future and Extinction Rebellion, as part of a Europe-wide campaign.
Opponents of the taxonomy proposal are upping their efforts in view of an upcoming vote on it in the European Parliament.
“These types of energy should be abandoned really, really soon,” said Beatrice Costantino of the Ultima Generazione (Last Generation) group that stages acts of civil disobedience to push for climate action.
“We are demanding that Italy stop using fossil fuels, including gas, now – immediately,” she told ANSA.
When presenting the proposal, Financial Services Commissioner Mairead McGuinness admitted that it “may be imperfect” but also argued that “it moves us further towards our ultimate goal of carbon neutrality”. (ANSA).