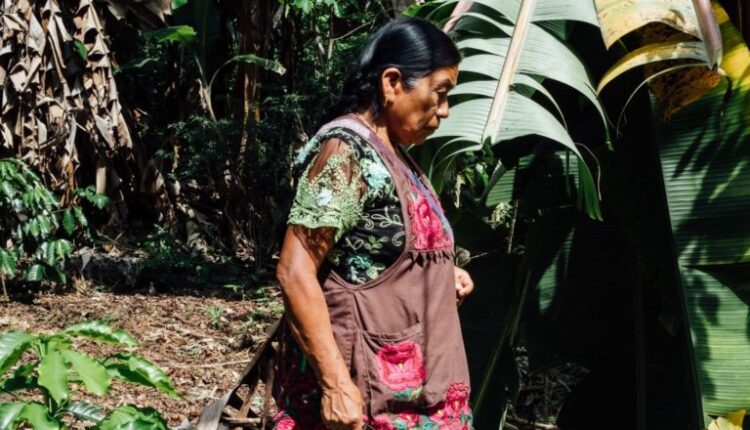 Lucio Jimenez Ocampo is always surrounded by coffee. In the yard of his house in Santiago Atitlán nestled in the Oaxaca state’s Sierra Norte highlands, there are about a hundred organic coffee plants of different varieties packaged in plastic bags. On his terrace, coffee beans of the Geisha variety are waiting to be sold to other farmers.

The plants are part of an Oaxacan farmers’ project testing coffee varieties and developing agroforestry plantations resistant to a fungal disease, known as coffee leaf rust, that ravaged coffee crops seven years ago. Coffee rust has no cure. But Lucio and other Indigenous Mixe farmers hope the project will protect the majority of their coffee production from the spreading fungus as it climbs further up mountains and reproduces under wetter and warming temperatures.

When coffee rust came to Atitlán in 2015, farmers were not prepared. When the parasitic fungi Hemileia vastatrix comes into contact with a coffee plant, it latches on and covers its leaves with orange spots. This ultimately reduces the plants’ ability to conduct photosynthesis. As leaves fall, less coffee cherries and seeds are produced. The seeds (known as coffee beans) inside the cherries are shrunken – affecting the quality and value of the coffee.

The state of Oaxaca lost about 50% of its production volume that year. Farmers in Atitlán say the production decline was higher, at about 80%. Coffee rust is still present in the region. Many coffee producers left the village and their crops in search for work in other Mexican states or in the U.S.

“Coffee was the only source of income for our family, the only crop that maintains our livelihood,” says Leon Castañeda Rojas, a coffee farmer in Santiago Atitlán. “And then the rust destroyed all our plants.”

Coffee rust is becoming frequent, and climate change could be the main contributor, says a study published in Science of the Total Environment.

With the slightest increase in temperature or rainfall, the fungus thrives, says Dr. Elda Melchor-Martínez, one of the authors of the study. New generations are born, and it climbs to higher warming altitudes where Arabica coffee (Coffea arabica), the most popularly produced species in Mexico, typically grows.

Coffee leaf rust first appeared in Brazil in the 1970s and spread throughout Latin American coffee farms. In Colombia, coffee farmers reported a loss of about one-third of their production in 2008. In Central America, the fungus destroyed 10 to 55% of all Arabica coffee crops between 2012 and 2016.

For residents in Sierra Norte highlands, Mexico’s warming temperatures are to blame for the 2015 outbreak in Atitlán. In the past 40 years, temperatures have increased by about 1.4 degrees Celsius in the country, according to the National Meteorological Service.

“We had observed changes in climate. It was becoming very hot and the rains were very strong,” Lucio recalls. “It rained in April and May when it was the dry season. People from outside warned us to prepare ourselves for the coffee rust but we did not listen.”

According to Mexico’s 2019 Operation Rules of the Agriculture Promotion Program, small coffee producers face the great challenge of loosing their coffee production due to the coffee rust and other devastating fungi, such as, Mycena citricolor. Worryingly, the coffee sector is not taken into consideration in national climate policies, says Dr. José Luis Jaramillo Villanueva, a professor of rural development at Colegio de Postgraduados in Puebla.

However, a state-wide coffee farmers’ project in Oaxaca is trying to help farmers face the challenges. Coffee leaf rust has no cure, but farmers hope this project can reduce its impact.