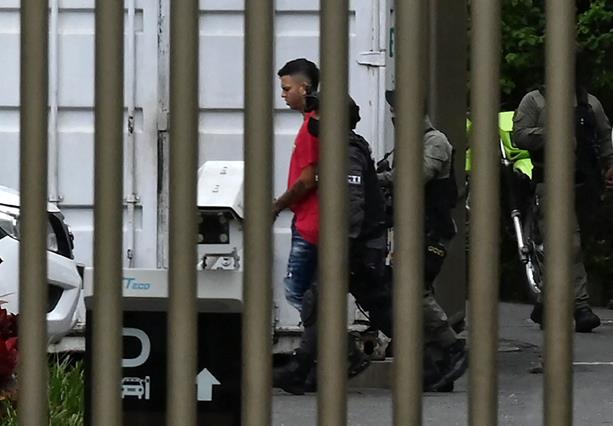 Five Suspects Arrested In Killing Of Paraguay Prosecutor On Honeymoon

Police in Colombia have arrested five suspects in the execution-style killing of a Paraguayan anti-drug prosecutor during his honeymoon, authorities said on Friday.

Prosecutor Marcelo Pecci was felled by two shots while he was on a beach with his new wife on the Colombian resort island of Baru on May 10.

His widow Claudia Aguilera said that two men landed in a small vessel and one of them shot Pecci twice — in the face and in the back.

The couple had only been married for 10 days and Aguilera is pregnant.

The motive of the killing was not known, but Pecci, 45, specialised in prosecuting cases of organised crime, drug trafficking, money laundering and terror financing.

In a video message as he arrived in Washington on an official visit, Colombian President Ivan Duque said that a joint operation between Colombian and Paraguayan authorities had ‘captured all of the suspects, including the gunman’.

‘We believe that with this important step, this horrible crime will be resolved and all of those involved will get what they deserve,’ he said.

Duque traveled to the United States from Colombia to take part in events marking 200 years of diplomatic relations between the two countries.

Colombian Attorney General Francisco Barbosa said in a video posted on Twitter that authorities had arrested ‘five people in the city of Medellin for their alleged involvement in the murder’ of Pecci.

Paraguayan Interior Minister Federico Gonzalez meanwhile said from Asuncion that four of the suspects are Colombian, while the fifth is Venezuelan.

Colombia, the world’s largest cocaine producer, is contending with a wave of violence despite a 2016 peace deal that disarmed the FARC guerrilla group and ended a near six-decade civil conflict.

Fighting over territory and resources continues in parts of the country between dissident FARC guerrillas, the ELN rebel group, paramilitary forces and drug cartels.

For its part, landlocked Paraguay — nestled between Brazil, Bolivia and Argentina — has become an important launchpad for drugs headed for Europe.

Paraguay and Colombia have recently strengthened their alliance in the fight against organised and cross-border crime.