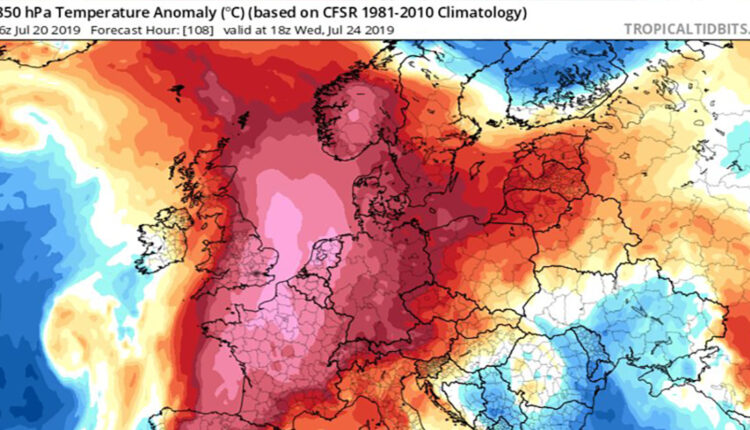 MURRAY – After a blisteringly hot week, the region will see some relief on Saturday and Sunday, but everyone should get ready for round two.

“This heat wave will end (Friday) because that will be the last very hot day of this heat wave,” said Justin Holland, Murray’s official government weather observer for the National Weather Service’s Paducah office. “There is going to be a small chance of some showers and storms during the day Friday, but I don’t think there will be anything widespread. There may be a couple of storms here and there, but not everybody’s going to see rain.”

While there may be some showers, Holland said he expects quite a few disappointed Calloway County farmers who desperately need rain right now. Even those who receive rain will probably only see about a quarter-inch, a half-inch at most. However, even with the lack of rainfall, Holland said the weekend should be quire pleasant, especially compared to the last four days.

“Saturday and Sunday will probably be in the upper 80s, and the dew points will be extremely low, meaning that it will not feel sticky or muggy outside,” Holland said. “It will feel much, much better than what it was this week, so that will be something people can look forward to for the weekend.”

The next wave is expected to begin Monday, with the high temperature likely in the mid-90s. Holland said the dew points will likely be lower throughout next week, but with even higher temperatures, it probably won’t feel any different from this week.

“This week, it’s been mid-to-upper 90s with high dew points, and next week, you’re talking about 100- 103-degree temperatures with lower dew points,” Holland said. “The average human body will not be able to tell a difference. The high for this week has been 99 degrees, and that came Tuesday. Wednesday saw a high of 98 degrees. Next week, it will probably be 95-96 degrees Monday, and then Tuesday through next Friday, that’s when we’ll probably see 100-103 degrees.

“There will not be any rain chance at all next week. We will have a dome of high pressure that will be sitting directly overhead, and typically when that occurs, you don’t get clouds to form. You’re just baking in the sunshine with no chance of rain.”

Holland said that while it might not get as hot the week after next, it will probably still be in the 90s, so there is no end in sight for the very hot and dry weather pattern the area has been experiencing. He said the average high for this time of the year is in the upper 80s, so this week has been about 10 degrees above average.

“We’ll go to about 12 to 15 degrees above average next week, so we will probably break some record highs,” Holland said.

Although the area is not yet officially classified as being in a drought, that could easily change without any rain next week, Holland said. So far, Calloway County has had 35 inches of rain in 2022, which is slightly above normal. Since June 1, the county has been slightly below normal, he said.

“If that trend continues throughout the summer, then we will go deeper and deeper into the drought,” Holland said. “March, April and May were very wet, so that will help things some for the short term, but if we don’t get any rains in the next week or two, then it will continue to play a key role for farmers as their fields and the depth of their soil’s dryness will (be a problem).”