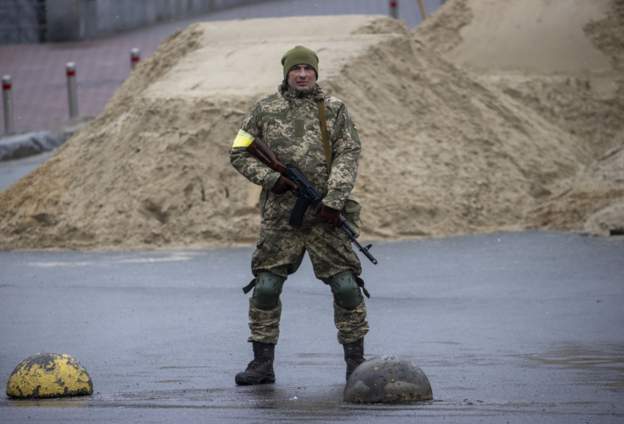 How well is Ukraine’s army coping?

It’s impossible to get hold of operational information about Ukraine’s military as Kyiv is anxious not to give away anything about potential vulnerabilities.

But the BBC has spoken to an expert who says there are two significant challenges facing Ukraine’s army in the coming days, despite its forces doing well to slow Russian advances.

Nick Reynolds, research analyst in land warfare at the RUSI think tank, says Ukraine must prevent both scenarios – while continuing to defend the country’s cities from Russian attack.

Firstly, there is a risk of Russian troops moving up from the south and making contact with their compatriot forces from the north.

If the two fronts combine into one it would isolate the large number of Ukrainian troops stationed along the line of conflict in Donetsk and Luhansk – where they have been concentrated since 2014.

“Right now Russian progress from the south is slow. But a major reason for those operations is so they can cut off the JFO [Joint Forces Operation area in eastern Ukraine]. It would isolate a significant proportion of the Ukrainian army”.

“Stocks by their own estimate at the start of the war were to last ten days of fighting. They’ll likely be running short fairly soon.”

It’s difficult to predict what supplies are left seven days in, but given the intensity of the fighting Reynolds predicts Ukraine will not be able to last much longer without fresh air-defence ammunition and artillery shell supplies.

Military aid being transported into Ukraine is having to travel by land after crossing into the country, meaning a slow journey over long distances.

“At the point where Ukrainian forces can’t get those types of munitions, they will be at a severe disadvantage even more so than they are now,” Reynolds says.