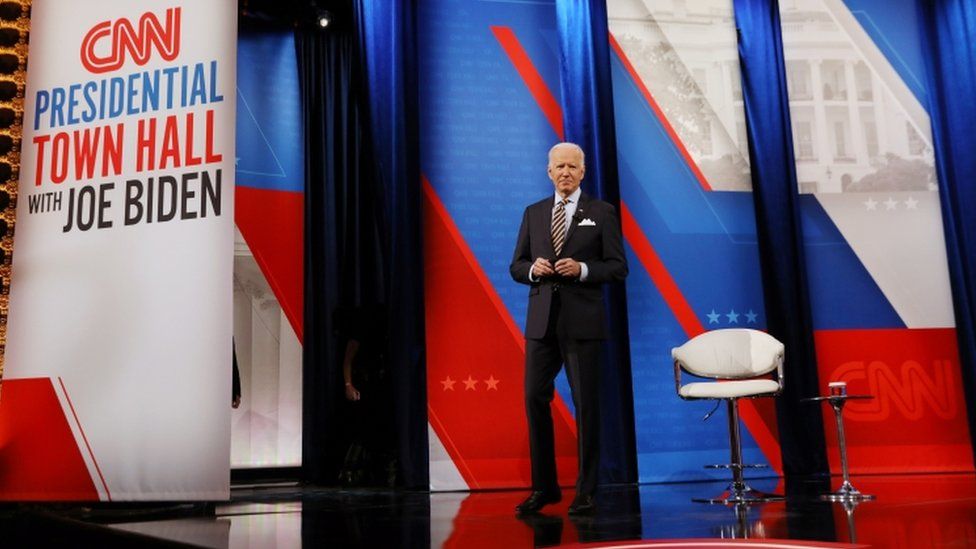 In freezing US, Biden seeks to cool down politics

Travelling with Donald Trump versus ridin’ with Joe Biden. Compare and contrast.

Look, Air Force One hasn’t changed with the presidency. It is still that elegant timepiece that came out of the 1970s. Elegant and all that, but dated as anything.

There is one priceless bit of swag that you get on Air Force One – the little box of M&Ms with the presidential seal on one side, and the signature of the president on the other.

Now, I know you’re already feeling sorry for me, but, the Biden ones aren’t ready yet. That means I have (as we say here) deplaned swagless (as no one says anywhere else).

So everything is exactly the same as the Trump era – except in one important respect. The TVs in the press cabin are now on CNN, not on Fox News.

One of the understated aspects of the peaceful transfer of power is the ability to change the channel on Air Force One.

After all, we were on our way to a CNN Town Hall, the president’s first official outing since his inauguration a month ago.

The town hall shows the extent to which Covid-19 is dominating everything. The big announcement from President Biden is that the US would have 600 million doses of coronavirus vaccine by July, meaning that jabs would be available to every American.

Biden also corrected something stated by his Press Secretary, Jen Psaki, on getting kids back to school.

“There was a mistake in the communication,” he told the CNN Town Hall audience. He wouldn’t box himself in absolutely, but said he hoped to have kindergarten to 8th grade pupils back in the classroom within the first 100 days of his presidency.

I’m guessing that must have been an uncomfortable moment for Psaki. But Biden has made that part of his shtick: if we make a mistake, we’ll own up to it.

There is an easy charm to Biden. He asked one questioner to come and see him after the town hall to talk to him. When a mother and her young daughter asked a question, he was engaging and empathetic.

Less convincing was his response to a small business owner who was worried about the impact of a $15 per hour minimum wage. He waffled about it generating growth, echoing what many economists say. But I’m guessing the man – who owned a woodworking business – would not have been overly impressed. It was a blah, blah, blah politician’s answer, that was painfully short of detail.

But there was one subject he didn’t want to talk about: Donald Trump.

“For four years, all that’s been in the news has been ‘Trump’. The next four years, I want to make sure all the news is the American people,” Biden said.

It was a neat soundbite.

He told another questioner that he was bored of being asked about Trump. In freezing cold Milwaukee, where the snow was thick on the ground, Biden was on a mission to lower the political temperature, especially after the storming of the Capitol on 6 January.

When the host, Anderson Cooper, invited the president to agree with the verdict of House Speaker, Nancy Pelosi, that Republican senators who voted to acquit were cowards he demurred. He didn’t want to get into name-calling.

And there was a big difference in the language deployed. Trump loved a wedge issue. He would always aim to appeal to his base; often alienating people on the other side. Biden is trying to unite.

Take this response: “Every cop when they get up in the morning and put on that shield has a right to expect to go home to their family that night. Conversely, every kid walking across the street wearing a hoodie is not a member of a gang.