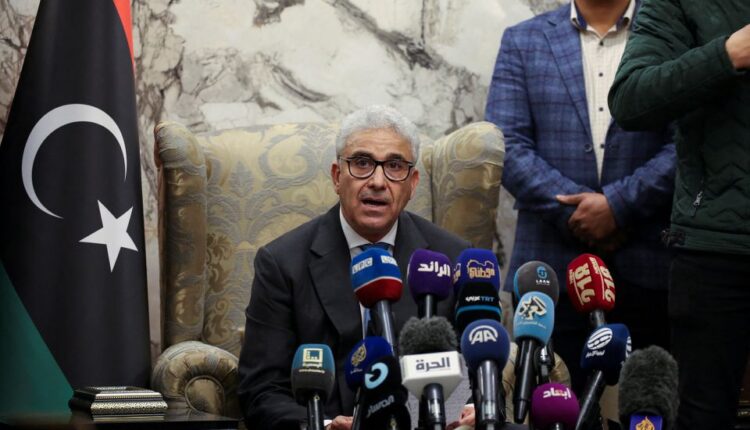 BENGHAZI, Libya, March 3 – A standoff between two rival governments in Libya worsened on Thursday with the risk of fighting or territorial division as the parliament in the east swore in a new administration while the incumbent in Tripoli refused to cede power.

Addressing the parliament after taking the oath of office, Fathi Bashagha said he was studying all options to take over in Tripoli. The present prime minister there, Abdulhamid al-Dbeibah, has said he will not hand over control.

Armed groups affiliated with both sides have mobilised in the capital and foreign forces, including from Turkey and Russia, remain entrenched in Libya nearly 18 months after a ceasefire ended the last major bout of warfare.

Underlining the tense situation, Bashagha’s office has accused Dbeibah of using force to try to stop his cabinet reaching Tobruk for the parliament session by closing air space and seizing three ministers who tried to travel by land.

Dbeibah’s government has not responded to those claims, though airline sources said domestic flights were not operating and a statement from his defence ministry warned against any armed convoy moving without permission.

The United Nations cast doubt overnight on the validity of the parliament’s effort to install Bashagha, saying it was concerned by reports that Tuesday’s vote of confidence “fell short of the expected standards”.

The position of international powers will be key in the coming tussle for control of Libya, with a risk of renewed war after a year and a half of comparative peace between major factions battling for control of the oil-rich state.

Groups located in the main oil producing regions have meanwhile warned they may block off Libya’s energy exports, which amount to 1.3 million barrels per day.

Libya has had little peace or security since the 2011 NATO-backed uprising against Muammar Gaddafi and it split in 2014 between rival governments based in Tripoli, in the west, and in the east where the parliament is based.

Neither the political nor the military coalitions that are crystallising now exactly match those that fought from 2014 until a 2020 truce, but any new conflict would again likely pit eastern forces against a combination of western groups.

Dbeibah’s government was put in place a year ago through a U.N.-backed peace process that was aimed at resolving political problems through an election, but the vote did not take place amid arguments over the rules.

Since then, the parliament has tried to take control of the process by saying Dbeibah’s term had expired and setting a course towards a referendum on an altered constitution and then elections in 2023.

Dbeibah has rejected the parliament’s stance and says he is planning to hold national elections in June. Both sides blame each other for the failure of December’s election and accuse each other of lacking legitimacy.

The parliament was elected in 2014 and mostly backed the eastern forces of Khalifa Haftar, which laid partial siege to Tripoli from 2019-20, destroying much of the city in an attempt to wrest it from the then internationally recognised government.

The United Nations secretary general’s spokesperson said in a statement there were reports that Tuesday’s vote did not meet standards of transparency and procedure, and of acts of intimidation before the session.

The parliament spokesperson has denied there was wrongdoing.

The United Nations said the main focus now should be on renewing the push for elections. U.N. Libya adviser Stephanie Williams will soon invite the parliament and an opposing political body, the High Council of State, for talks.

The designated economy minister in Bashagha’s government, Jamal Shaaban, said he would not join the new administration over doubts about Tuesday’s voting process.