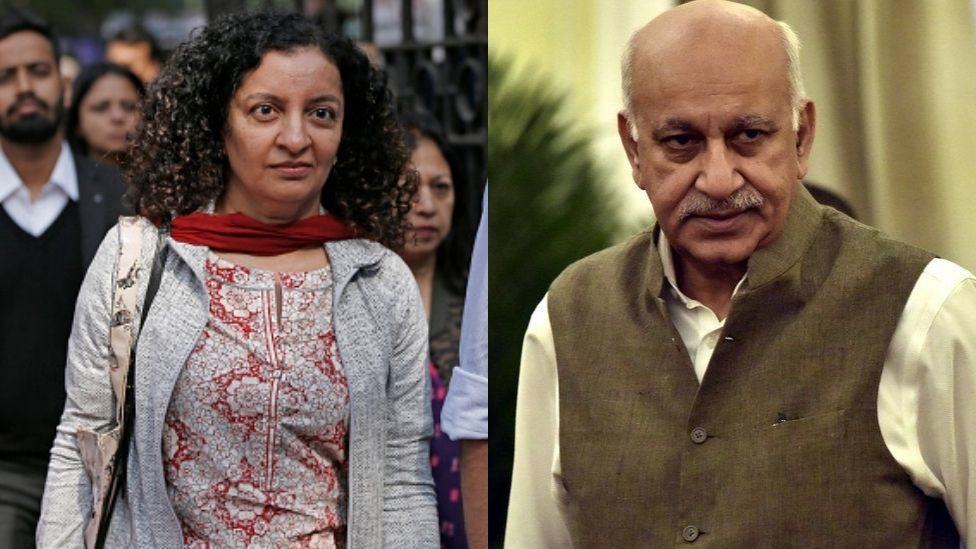 A former Indian minister has lost a defamation case against a journalist in a ruling likely to have huge implications for the #MeToo movement.

MJ Akbar was accused by Priya Ramani and several other women of alleged “predatory conduct”.

On Wednesday, a judge ruled that “a woman cannot be punished for raising her voice against sexual abuse”.

Ms Ramani said she felt “vindicated on behalf of all the women who have spoken up against sexual harassment at work”.

The BBC’s Geeta Pandey in Delhi says Wednesday’s judgement by the trial court in the capital, Delhi, is extremely significant as it will set a precedent for other cases resulting from the #MeToo movement in India. It will serve as encouragement to other victims and survivors to take on their abusers.

A celebrated editor and author-turned-politician, Mr Akbar was the most high-profile figure to be named in India’s #MeToo movement. He resigned as junior foreign minister after the scandal in October 2018.

He sued Ms Ramani, saying her accusations had damaged his “stellar reputation”.

Ms Ramani said in court that her defence was “truth and public good” and that Mr Akbar’s reputation was “flawed”.

What did the judge say?

In his landmark order, Additional Chief Metropolitan Magistrate Ravindra Pandey said that “a man of social status can also be a sexual harasser” and that “sexual abuse takes away dignity and self-confidence and right of reputation can’t be protected at the cost of right to dignity”.

He accepted Ms Ramani’s contention that Mr Akbar’s claim of a stellar reputation had been demolished by the testimony of another journalist who also accused him of sexual abuse.

In court, Mr Akbar’s lawyers questioned why Ms Ramani had not complained earlier about something that happened in 1993, but the judge ruled that a “woman has the right to raise her grievances even after decades”.

Ms Ramani said with this order “sexual harassment at the workplace has got the attention it deserves, despite the fact that it was me, the victim, who had to stand up in court as the accused”.

What is the case about?

In 2017, Ms Ramani wrote an article in Vogue about the behaviour of male bosses in the context of the American #MeToo movement and the allegations against Hollywood producer Harvey Weinstein.

While researching the article, she told the court, she remembered her personal story of her first male boss who’d called her into his hotel room for a job interview. The article – titled “To the Harvey Weinsteins of the world” – did not name him but a year later – on 8 October 2018 – she tweeted that the unnamed boss was MJ Akbar.

In the days before and after her tweet, more than a dozen women alleged that they had been harassed, sexually assaulted and even raped by him – charges he strongly denied and described as “false” and “baseless”.

What were Ms Ramani’s allegations?

In the Vogue article that was presented in court as a key piece of evidence, Ms Ramani writes about when she went to a hotel to meet Mr Akbar for an interview in 1993 for a job in The Asian Age newspaper.

She says he invited her to his room – in court, Mr Akbar has denied the meeting ever took place.

“It was more date, less interview,” wrote Ms Ramani. “The bed, a scary interview accompaniment, was already turned down for the night. Come sit here, you said at one point, gesturing to a tiny space near you… I escaped that night, you hired me, I worked for you for many months even though I swore I would never be in a room alone with you again.”

Ms Ramani said she called him “a predator because of my personal and shared experiences, since over the years, many colleagues and ex-colleagues have shared similar or significantly worse stories of their experiences of sexual harassment by him”.

What was Mr Akbar’s response?

A week after Ms Ramani’s tweet named him, the former minister sued her for criminal defamation.

In court, he denied the incident alleged by Ms Ramani – he said he had not asked her to meet him at his hotel, or that she called him from the hotel reception, or that he called her to his room.

He accused her of using “language that was deeply offensive… and a web of fabrication, spun out of lies” and said her tweets became “the basis of articles in Indian and international press”.

“This has adversely affected my public reputation as well as my standing within family and friends,” he said, and that he had filed the case “to protect my reputation”.

“I’ve been harmed by the offensive words used which were false and caused irreparable damage to my stellar reputation which I had built over many years.”

What did other witnesses say?

In the days before and after Ms Ramani’s tweet, 14 women journalists made similar or even more serious allegations against Mr Akbar.

Some of their articles and tweets were presented as evidence in court.

Ms Ramani and several of the witnesses who testified in court said that in the 1990s, Mr Akbar was a powerful man – editor-in-chief of The Asian Age newspaper, a former MP and former spokesman of the Congress party.

They pointed out that he was in his 40s, had power and clout and that the women he allegedly preyed on were in their early 20s, they were his subordinates, had no influence, and many of them desperately needed to keep their jobs.

In what appeared to be one of the most damning testimonies against him, a former colleague Ghazala Wahab alleged in an article in The Wire that her last six months at The Asian Age “were pure hell” when he repeatedly “sexually harassed and molested” her.

In a statement posted on Twitter, Mr Akbar said Ms Wahab’s – and other – allegations were politically motivated: