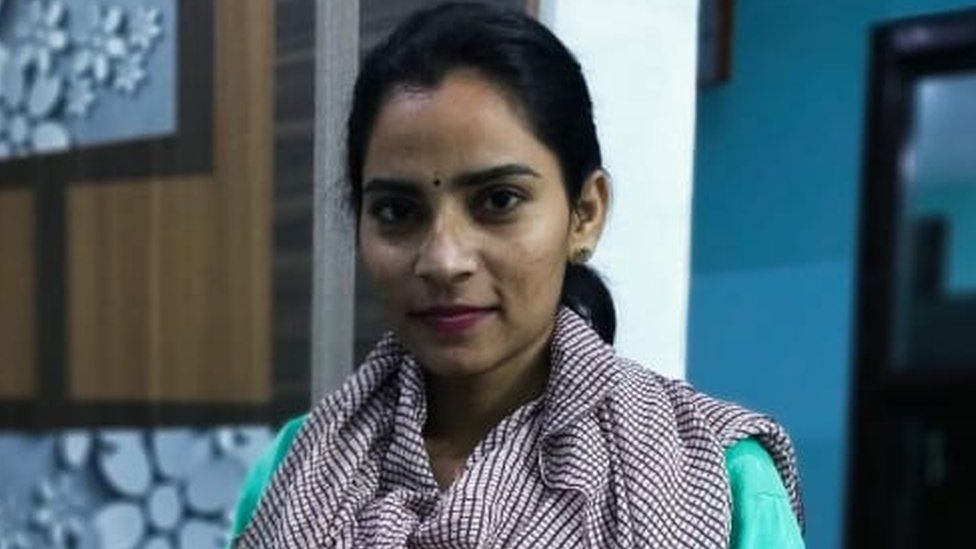 Earlier this month, Meena Harris, niece of American Vice President Kamala Harris, called for the release of Nodeep Kaur – a 25-year-old Indian labour rights activist who’s been in prison for more than a month. Her arrest has caused global outrage.

Tweeting with the hashtag #ReleaseNodeepKaur, Ms Harris wrote that the activist was “arrested, tortured & sexually assaulted in police custody”.

Thousands of others have tweeted about her case, and farmers’ leaders and student activists in the northern Indian state of Punjab have expressed solidarity with her.

On Wednesday, the Punjab and Haryana High Court is due to hear her bail petition. Separately, the court has started another case, asking the police in Haryana state to explain her “illegal confinement” after the chief justice received emails alleging torture in custody.

Nodeep was arrested on 12 January as she participated in a protest outside a factory in Kundli Industrial Area (KIA), on the outskirts of the Indian capital Delhi.

One of the main reasons why her arrest led to a Twitter storm is the circumstances in which she was picked up and allegations that she was “sexually assaulted and tortured” – accusations that police have strongly denied.

“She was beaten by male police officers publicly and they dragged her by her hair into the police van,” her older sister Rajveer Kaur told me.

“The next day when I met her in jail, she told me she was beaten inside the van and at the police station. She was slapped and punched, and hit with shoes and sticks, including on her private parts, resulting in heavy bleeding for days,” she said.

Her medical report is yet to be shared with her family. But an official who’s seen the report told me that “her injuries indicate that she was tortured and hit on her private parts”.

But who is Nodeep Kaur and why has she been arrested?

It’s a complicated story – of caste and poverty; politics and protest; rivalry between two states ruled by different parties; and rights of workers and farmers.

Nodeep, who comes from a poor Dalit family (formerly untouchables who were placed at the bottom of India’s repressive caste hierarchy) in rural Punjab, had to discontinue her studies after high school because of financial difficulties.

Although Sikhism preaches equality, caste discrimination remains entrenched in Punjab. Dalits make up a third of the state’s population and more than half of them are Sikhs, including Nodeep’s family.

Her younger sister Harveer says: “Being Dalits, we have always faced caste discrimination and because we are women, we’ve also faced gender issues. Then we are poor. Nodeep has always been very sensitive to these issues.”

Harveer says in autumn last year, her sister moved to Kundli to take up a job in a glass factory, with the ultimate intention of going back to college.

It was there that she became a member of Majdoor Adhikar Sangathan (MAS), a union of workers, that would often organise protests to pressure the firms to pay their dues.

Nodeep had participated in protests many times, including on one occasion to get what she herself was owed.

At least on two occasions in December, there had been scuffles between the workers and bouncers hired by the management – and the union had accused the police of “working with the industrialists to curb dissent and unionisation”.

What happened on 12 January?

There are two different versions of how the violence started when Nodeep and dozens of union members went to protest outside a factory.

Police say they sent a team to the factory after receiving information that workers were manhandling the management and staff, and attempting to extort money.

The union members say they were attacked by the bouncers and the police; but police say it was the other way round. They accuse Nodeep in particular of “attacking the police”.

Senior police official JS Randhawa shared two videos with my BBC News colleague Shalu Yadav that he claimed were shot at the protest site on the day.

One shows a woman who’s part of a group that appears to be beating up policemen with sticks; the second shows her giving a speech where she says “we beat them back, we chased them away, and we’ll do it again”.

Mr Randhawa claims the woman in the videos is Nodeep and that “them” in her speech refers to the police.

“She was inciting people to attack the police,” he told Shalu, adding that “seven policemen were grievously injured in the attack. Later, she was arrested from the spot”.

Nodeep’s sister Rajveer did not deny the video – but she said that “Nodeep was, in fact, trying to stop the protesters from attacking the police”.

What is Nodeep’s connection with protesting farmers?

Nodeep had been working for only a few months in Kundli when thousands of farmers began gathering at the end of November on the outskirts of Delhi at Singhu, not far from her workplace.

Within days, Nodeep and several of her colleagues began participating in farmers’ protests against new laws that will loosen the rules around the sale, pricing and storage of agricultural produce.

Now in their third month, the protests have become one of the biggest challenges faced by Prime Minister Narendra Modi’s Bharatiya Janata Party (BJP) government. The authorities have offered to suspend the laws for 18 months, but farmers say they must be repealed.

Nodeep and her fellow workers believe that the new laws will harm not just the farmers, but also the working class and that privatisation of farming will lead to a rise in prices of food items and increase their hardships.

In early December, she lost her job at the glass factory for participating in the farmers’ protest.

Since her arrest, she has been in custody in a jail in Haryana and police have accused her of multiple offences like “attempt to murder, extortion and trying to snatch official documents and a gun from the police”.

“Some of these offences are very serious in nature and carry jail terms of 10 to 14 years,” advocate Harinder Singh Bains, who’s part of Nodeep’s legal team, told the BBC.

Police, he says, have lodged three criminal cases against her – she has been granted bail in two cases. On Wednesday, the high court is due to hear her appeal for bail in the third case.

“We knew there would be repercussions for standing up to the state, but we never thought she would be accused in fake cases or assaulted,” says her younger sister Harveer.

“All she was doing was trying to help workers get their dues, but she’s been charged with attempt to murder and extortion. It’s so unfair.”

Rajveer Kaur, who met Nodeep a few days back in prison, says her sister’s injuries are healing and that she is in high spirits.

“She was very generous and always put the needs of others above her own. In jail, she’s concerned about her fellow prisoners. She’d asked me to bring warm clothes, slippers and cups for some of the inmates.

“When I met her last Friday, she told me to arrange lawyers for those inmates who do not have legal help. I told her, ‘Let’s get you out first,'” she said.