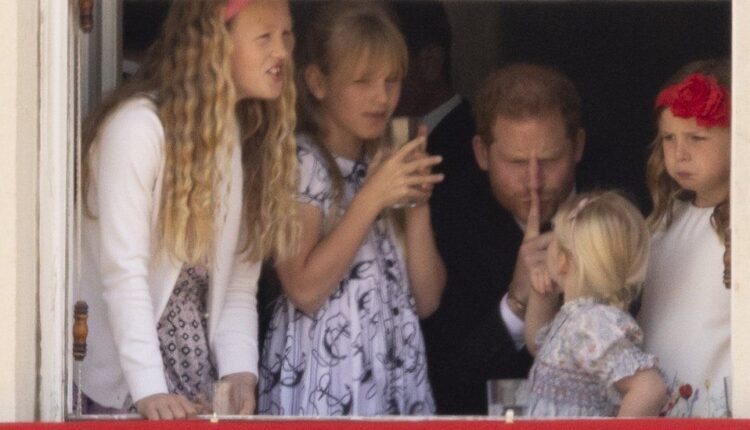 For such a high-profile couple, the Duke and Duchess of Sussex have maintained a remarkably low-key presence on the first day of the Platinum Jubilee celebrations.

Prince Harry and Meghan’s travel over the Atlantic for the Jubilee weekend had been treated beforehand like some kind of unpredictable weather front approaching.

Storms were feared. Royal officials feared the damage. But it’s been very low-profile for a couple who provoke such a high level of public attention.

They watched Trooping the Colour from a window, not part of the carriage procession or the family group allowed on the balcony of Buckingham Palace.

There’s no escaping their big box-office status, but here they were watching from the wings.

They also dodged any airport arrival photo-fest, with suggestions the Queen sent cars to collect them from a private airport. Everything stayed under the radar.

Such a low profile is not likely to be accidental, with Prince Harry and Meghan wanting to avoid any accusations of stealing the limelight.

This is the Queen’s big weekend, celebrating her 70 years as monarch, and there are likely to have been warnings about avoiding anything that could overshadow the Jubilee events.

So it’s likely that Prince Harry and Meghan will have been urged to stay on-message and remain in the background, part of the backing band rather than the centre of attention.

It might be seen as a way of building bridges. It’s the Sussexes back to take part in a big event in a way perhaps not seen since leaving their royal roles in 2020.

Their daughter Lilibet, aged one this weekend, until this week hadn’t met her great-grandmother the Queen.

This quieter approach, without appearances and interviews, might be a way of re-establishing family links and connections with home.

Covid is going to keep Prince Andrew away from the Thanksgiving Service at St Paul’s on Friday – an announcement on Thursday afternoon that raised some eyebrows. But Prince Harry and Meghan will be there and it will be a further sign of inclusion.

If the ambition of Buckingham Palace is for Prince Harry and Meghan to be there but not to draw attention to themselves, it won’t be easy. Because there is no escaping how much public interest they generate and how easily they could start making headlines.

If many of the Jubilee events are rather worthy events like lighting beacons, Prince Harry and Meghan can generate media fireworks, touching on issues of race and representation, celebrity and wealth. They are a news tinderbox, even without trying.

They certainly divide opinion, provoking strong positive and negative responses. They attract and they irritate. And such interest drives media attention, not to say huge web traffic to news stories, like moths drawn to a digital light.

According to a survey from YouGov this week, young people are more likely to be supportive of Prince Harry and Meghan. But overall the couple have lost much public sympathy in the UK, with their popularity at its lowest recorded level. But everyone has an opinion.

As the Jubilee weekend progresses there will be more attention on the Sussexes.

There have been expectations they will meet the Queen, but it’s understood that any such meetings will be considered as private and any details will remain speculation.

If the appearances so far are any guide, it could be a case of cryptic smiles from a distance and a determined effort to say little. In PR terms, it might not be a bad tactic.