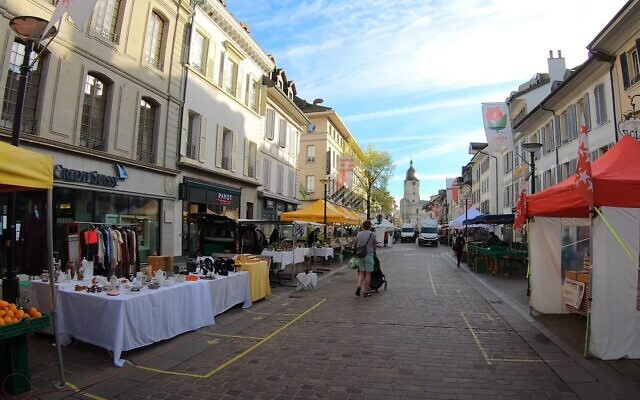 GENEVA — A Swiss-Turkish dual national has been indicted in Switzerland over a “jihadist motivated homicide,” as well as for an arson attack in the name of the Islamic State group, Swiss prosecutors said Thursday.

The Office of the Attorney General of Switzerland (OAG) announced that it had indicted the 28-year-old man over a knife attack in the western Swiss town of Morges nearly two years ago.

The suspect, whose name was not given, had stabbed to death a 29-year-old Portuguese national at a kebab restaurant near the Morges station on the evening of September 12, 2020, according to the ATS news agency.

The prosecution said he was facing a long line of charges, including murder, attempted intentional homicide and of violating the law against association with al-Qaeda, IS and related groups.

“The suspect planned and carried out a Jihadist-motivated attack with the aim of exacting revenge for the victims of the war between the coalition states and the ‘Islamic state,’” the OAG said in a statement.

Prior to the attack, the man is also suspected of several offenses, including sharing IS propaganda material, and attempting to join IS in the conflict zone between Syria and Iraq.

The OAG charges that the man had set off in 2019 with the aim of continuing to Turkey and on to Syria, but had not made it further than Italy before turning back to Switzerland.

In April 2019, he is also suspected of having attempted to cause an explosion at a filling station in Prilly, which like Morges is in the western Swiss canton of Vaud.

“He planned to set fire to the filling station and thereby carry out an attack in the name of IS, but was unable to do so,” the OAG said in its statement.

The man has been in pre-trial detention since his arrest a day after the murder in Morges. While inside, he stands accused of attacking and trying to kill a guard, and also of attacking a police officer.

Switzerland has not experienced any large-scale attacks attributed to Islamic extremists, but has in recent years seen some individual jihadist-linked attacks.