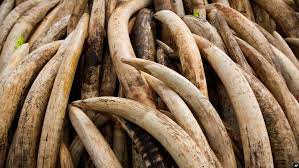 A spike in seizures of elephant ivory from people emboldened enough to be trying to sell it openly in markets, from their houses, and even at a fuel station, has raised concerns among conservationists about a return of poaching.

Police reported the six villagers were arrested on May 3 and 4, 2022, while trying to sell elephant tusks in the mining town of Hwange, in Zimbabwe’s Matabeleland North province.

On May 1, 57-year-old Collin Tapfumaneyi Chizengeni was more audacious: arrested while trying to sell 21 pieces of ivory from his house in Gutu.

On April 19, a Zimbabwe Parks and Wildlife Authorities (ZimParks) ranger at Sinamatela Camp in Hwange National Park, and a Chikurubi Prison officer, were arrested, caught selling elephant tusks at a fuel station.

They were asking for US$50 per kilogram, police said, after detectives from CID Minerals, Fauna and Flora Unit in Harare apprehended Simibio Kakomo and Shepherd Musiniwa.

Centre for Natural Resources Governance director Farai Maguwu said the amount of ivory being recovered is a worrying trend and may indicate the presence of a local market.

At the same time observers say Zimbabwe’s declining economy has also created an environment conducive to wildlife crime in communities.

Villagers in Hwange who spoke to Zim Morning Post on how they can better help authorities fight wildlife crime, said exclusivity by state actors was pushing some villagers to work in common purpose with wildlife offenders.

“Despite living with elephants and wildlife, we are yet to enjoy the returns, yet our maize fields are decimated by wildlife every season,” said Dete villager, Sarah Mutale.

“We now have cases of villagers coming together in common purpose with poachers because it was a win-win situation in that problem animals are being eliminated and meat is being provided. The alternative is waiting on the government and the Rural District Councils (RDCs) for funds that never trickle down to us.”

Another community member, who preferred anonymity fearing victimisation, lamented that communities have no control over the funds generated from wildlife, which are administered by RDCs and Safari Operators.

“We do not know what is contained in the agreements signed on behalf of the community by the RDC,” said a Hwange villager.

However, Chief Dingane Nelukoba whose area of jurisdiction covers much of Hwange, batted in the corner of authorities.

He insisted that RDCsare implementing various positive conservation strides and “anyone pointing fingers at government or the rural district council” for not doing enough “is attempting to find a scapegoat for their illegal crimes.”

As for the six suspects arrested in Hwange, the alleged wildlife offenders “were found in possession of 10 elephant tusks, one fresh elephant tail, illegal firearms and ammunition,” said police spokesperson Paul Nyathi.

The price currently paid for raw ivory in Asia, according to an investigation by the Wildlife Justice Commission, is between US$597 and US$689 per kilogram.

It was not clear how much the suspects were charging for the ivory or how they had come to be in possession of the ivory. Authorities did not reveal the discovery of any elephant carcasses.

searching for elephant tusk buyers in the Kamativi area, leading to the arrest of the gang,” Nyathi said of four of the six arrested.

“The suspects were searched and four elephant tusks, with an estimated weight of 13 kilograms, a fresh elephant tail, an AK47, with a magazine of 26 rounds and AK47 loose rounds, a 375 rifle loaded with nine rounds, five 375 rifle loose rounds, four axes, and five jungle knives were recovered.”

ZimParks regional manager for north-west Matabeleland, Samson Chibaya said total recoveries after all six suspects had been arrested, amounted to “10 elephant tusks, one by AK 47 rifle, one by 375 rifle, two by 303 disassembled rifles, 44 by AK 47 ammo and 14 by 375 ammo.”

Those higher up admit there are challenges. Zimbabwe’s Minister of Environment, Climate, Tourism and Hospitality Industry, Nqobizitha

Mangaliso Ndlovu said the government is making continued efforts to address the challenge of negative consequences of human and wildlife interaction, which was driving on a retaliatory path through poaching.

“To deal with these emerging challenges Zimbabwe, through ZimParks, submitted a funding proposal to cater for law enforcement and community livelihoods for €400,000 (£342,000) and €600,000 (£513,000) respectively,” Ndlovu said. The speech was read on his behalf last week after the German government provided one million euros for the support of wildlife law enforcement and community livelihoods.

“The Zimbabwe proposal was therefore accepted with the project tenure of the Covid-19 emergency grant stretching from April 2020 to April 2022,” he said. Zimbabwe’s Government is currently reviewing the 1992 Wildlife Policy as compensation and lack of inclusivity remains a contentious issue.