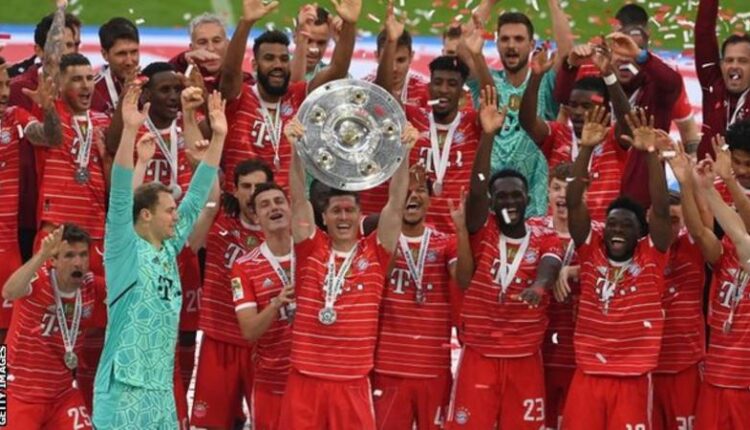 The era of Robert Lewandowski at Bayern Munich is coming to an end.

The Poland striker, who has scored 344 goals in 374 competitive games for the German side, has made it very clear he wants to leave this summer.

“My story with Bayern is over. I don’t see any possibility to play for this club any more,” Lewandowski said during a press conference with the Poland team.

These are harsh words coming from one of Bayern’s mainstays during the past 10 years. Lewandowski, advised by agent Pini Zahavi, has chosen confrontation over dialogue with his club to force a move.

In recent weeks, Bayern’s management repeatedly stated Lewandowski is not for sale, pointing

at his contract that runs until 2023.

However, the striker, who will turn 34 in August, intends to sign one last lucrative deal this year and has chosen Barcelona as the destination for what will likely be the final stage of his career.

He has a verbal agreement with the Catalan club over a three-year deal. The potential move could become a drawn-out affair though, as Barcelona are under strict financial supervision by the Spanish league and cannot easily pay a likely transfer fee of about 40m euros (£34m).

Lewandowski’s exit is only one issue, though, for a club considered a European superpower for more than a decade but one now in danger of falling even further behind the continent’s top clubs.

The quarter-final loss to Villarreal in this year’s Champions League has raised questions about Bayern’s competitiveness outside the Bundesliga.

Winning the league for a 10th time in a row means little, as the domestic competition, including Borussia Dortmund, is miles behind Bayern.

In contrast, Bayern are fighting an uphill battle internationally because of financial constraints. Having made the Champions League semi-finals in eight of the past 13 seasons, Bayern have now been knocked out at the quarter-final stage in the last two years – and there are fears things could soon get even worse.

Bayern can count on reliable sponsors but do not have billionaire owners.

Consequently, their liquid assets decreased from 221m (£188m) to 113m euros (£96m) during the past two years, mainly because of the impact of Covid-19 on revenue streams. A further decrease down to 60m euros (£51m) is expected.

Bayern are simply not able to keep up with Paris St-Germain, Manchester City or Real Madrid economically. Hence, they have to act extremely cleverly in the transfer market and maintain a winning culture.

Bayern have already made peace with the fact they will lose their top striker this summer and are planning for a future without Lewandowski. According to sources within the club, their plan includes playing with a fluid three-man attack and not a ‘target man’.

While Bayern are interested in traditional number nines such as Austria’s Sasa Kalajdzic and the 19-year-old Slovenian Benjamin Sesko, the club’s executives and manager Julian Nagelsmann know they will not be able to replace Lewandowski adequately.

There are only a handful of strikers on Lewandowski’s level and none of them are available to Bayern.

So, Nagelsmann is planning for a three-man attack like Jurgen Klopp’s Liverpool, because Leroy Sane, Thomas Muller, Kingsley Coman and Jamal Musiala are suitable for such a set-up.

Bayern have also approached Sadio Mane’s management and are working hard on a deal with the Senegal forward, although there are still some financial issues to resolve in those negotiations.

He would not be a Lewandowski replacement, but he could be seen as a statement signing for the German side and possibly prevent Bayern from falling behind even further on a European level.

Rifts and an ageing squad

In a moment when calmness and cohesion are needed, Bayern are more unsettled than they have been in several years. Nagelsmann and sporting director Hasan Salihamidzic have differing opinions on many things, including an ageing squad.

An increasing number of players also seem unhappy about their situation.

“I cannot imagine good co-operation after all that has happened in the past few months,” Lewandowski said recently.

We do not know whether his statement was only a means to force a move or mirrors his honest opinion, but it is good fodder for those that have criticised the communication within the club.

Serge Gnabry is another key player who could jump ship soon. As with Lewandowski, financial incentives are not the main motivation for the Germany winger as he considers his departure, because Bayern recently made a lucrative extension offer. Instead, he feels he is not respected enough.

Nagelsmann himself is also not liked by everyone in the dressing room, which could cause a rift if Bayern are going through a dry spell in the first few months of next season as they get used to playing without Lewandowski.

How the German champions, one of the best-oiled machines in European football in the past decade, negotiate the early weeks of next season will be a significant guide as to how successfully they will tackle their uncertain future.