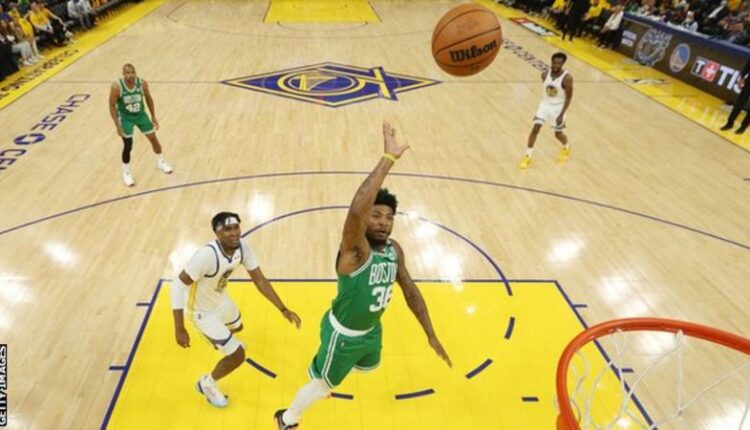 The Boston Celtics hit nine three-pointers in the final quarter to overturn a 12-point deficit and beat the Golden State Warriors 120-108 in Game One of the NBA Finals.

Stephen Curry hit a game-high 34 points for the Warriors, who led 92-80 and had not lost in their nine previous home games in this season’s play-offs.

But Jaylen Brown hit 10 points in the final quarter to spark a Celtics win.

Game Two in the best-of-seven series is on Sunday, again in San Francisco.

It was a stunning return to the Finals for Eastern Conference champions Boston, after five failed runs in the play-offs over the past 12 years.

“You have to give them credit,” said Warriors coach Steve Kerr.

“They just came in and played a helluva fourth quarter. It’s as simple as that. They deserved their win.”

Al Horford, who joined Boston in 2007 and scored 26 points, said he had been “waiting for this moment” for a long time.

The 36-year-old also added he wanted his team-mates to relax and not to feel the pressure of the occasion.

“I wanted to make sure that our guys came out here and played free,” he said. “I wanted them to understand that this is just a game, so just go out there and have fun.

“We have a lot of great guys here, guys that have really bought into what we’re trying to do.”